In July 1839, another Frenchman, Hippolyte Bayard, discovered the means of obtaining positive images directly on paper. A silver chloride-coated paper was darkened to light and then exposed in the darkroom after being impregnated with silver iodide. The exposure time was thirty minutes to two hours.

Also in 1839, the announcement of the invention of the daguerreotype prompted the Englishman William Henry Fox Talbot to resume interrupted investigations, whose beginnings date back to 1834. In 1841, he patented the calotype, the first negative/positive procedure that allowed the multiplication of the same image thanks to obtaining an intermediate negative on silver chloride paper, turned translucent thanks to wax.

As with the daguerreotype, the latent image was then developed by means of a chemical, the developer: a solution of gallic acid and silver nitrate. A second sheet of paper also coated with silver chloride was later exposed through the translucent negative, to give the final positive. 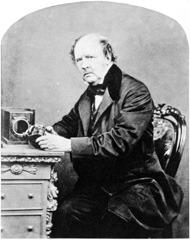