How fast can a cheetah run?

Speed is the signature trait of a cheetah. There is no other creature on the land that matches the pace and explosive power of this wild animal. Moreover, a cheetah is certainly a sprinter, but it can't endure running with that higher speed for long. It has perfectly evolved physiology mixed with her habitat challenges. Its ways of hunting involve short-sprints that leave the prey by surprise. The distance that a cheetah is capable of running before taking a rest differs according to some factors. Intense heating will make the cheetah tire fast. It explains why a cheetah chooses to hunt at dawn and dusk. Furthermore, running on sandy soil or rocky areas is difficult. Hence, the cheetahs can't keep up a sprint for long on flat and smooth terrain.

How fast can a cheetah run?
Cheetah can reach a speed of about 75 mph or 120 km/h. Furthermore, Cheetahs are predators that sneak up at their prey & sprint for a small distance to attack and chase.
The average speed of a Cheetah is just 40 mph or 64 km/hr, punctuated through short bursts at the top speed. It can accelerate higher and reach a speed of about 47 mph (75 km/hr) in just two seconds. It can accelerate from 0 mph to 60 mph in just 3 seconds & three strides. Cheetah accelerates like one of the world's powerful sports vehicles.
The world's record for "quickest land animal" is held by Sarah, a female Cheetah living at Cincinnati Zoo in Ohio. When Sarah was 11-years old, she ran a 100-meter dash in just 5.95 seconds, with 61 mph as the top speed.

Reasons why Cheetah is the fastest animal on land
There is a combination of factors which supports the amazing speed of Cheetah.
•    Cheetahs have long, thin legs, a flat rib cage, and a small head. This assists in reducing wind resistance. Despite Cheetah's legs being long & skinny, they are powerful predators. Adult cheetahs can weigh 160 lbs. & 4-feet 11" long.
•    Cheetah's skeletal structure also makes them speedy. They have a very flexible spine, loose shoulder-blades, flexible hips, and they can keep & release power like springs.
•    Cheetahs have hard-footpads & blunt, semi-retractable claws. These features assist them in griping well to the ground.
•    Cheetahs have a bigger heart, lungs, & nasal passages. Thus they can attain more oxygen as they run. It prevents them from getting out of breath fast when moving at swift speeds.
•    A Cheetah has strong strides, which means, for more than half the time they're running, the four paws are off-the-ground surface. It is similar to other animals like greyhounds and horses.
•    Cheetah's tails which can be about 33 inches long assist the cheetahs' speed by acting as a rudder to stabilize and steer.

Lastly, just like their straight-line acceleration, cheetahs also decelerate quickly. They can move from about 60-mph (97 km/h) to 14 mph (23 km/h) in just three strides. 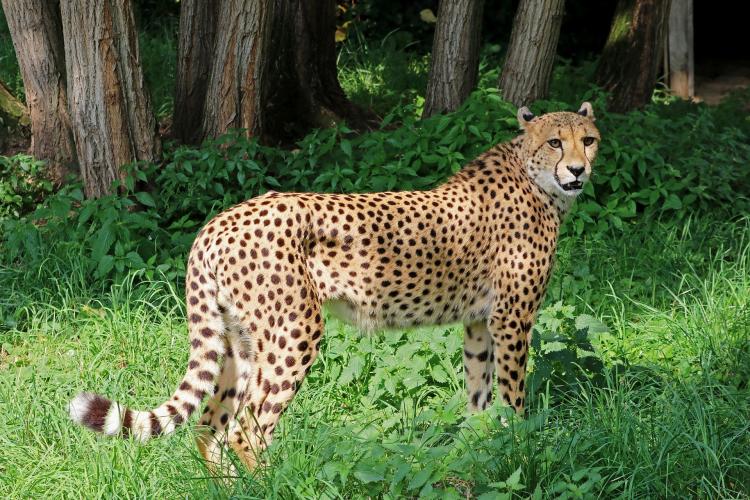