Living in a clay house

Many people who know us look strange when they hear that we live in a clay farm in Hungary (similar to the one in the photo below). During our search for a suitable home, many even advised us not to choose a clay house. The association with such a house is, for many, that of a poor shelter, often somewhat dilapidated with crooked windows and doors and with cracks in the walls. A bit similar to a plaggenhut like you used to encounter on the Peel and in Drenthe. At best, such a clay house has undergone a thorough renovation, replacing at least part of it with 'real' stone walls and a new tiled roof with insulation boards.

Nevertheless, clay has been used for centuries as the main building material, especially in regions where there were few building materials available. Similarly, in the region where we now live in the south of Hungary. Most older houses and farms are at the end of the nineteenth century or early twentieth century 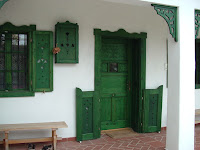 built from very durable stamp belt. On a foundation of natural stone. And most of these houses now, after more than a hundred years, still live very satisfied residents. They are also in excellent condition, provided they are reasonably maintained and waterproof. Because moisture and rainwater are, of course, the worst enemy of clay.

Thus, a long service life of more than a hundred years. And they can last at least a hundred years. This cannot be said of many (flat) buildings in the Netherlands and Belgium. How can that be? Earned loam not a much better 'name' as a building material?

Now that we live for a little year in our authentic mud swbian farm (Hungarian; parasztház) we can answer this question with a resounding 'yes'. We immediately noticed that the indoor climate of the farm is very pleasant. Because the clay walls absorb and release moisture, there is always, in a completely natural way, a fine indoor climate with optimum humidity. It's not for nothing that people with asthmatic complaints feel like frog in a clay house. No air exchange system or air conditioning system can match this! It is also a completely natural building material without chemicals or fossil emissions that are released during its production or use. The loam was extracted and processed on the spot. This makes it not only a sustainable building material, but even completely circular and CO2 neutral.

Loam also has the pleasant property that absorbs the sound well. Therefore, it does not sound hollow in the house and outside sounds hardly penetrate through which we enjoy an undisturbed night's sleep. Because of the sixty to seventy centimeters (!) thick clay walls is also the insulation value fine. In addition, loam acts as a storage medium for radiant heat. When we have the stove on, part of this radiant heat is absorbed directly through the walls and then gradually released back. A kind of natural cuddle wall. Try that with a brick or concrete wall... Another advantage is that the maintenance of a mud wall is very advantageous. It can be repaired easily and inexpensively. Each do it yourself can simply update holes or cracks with rigips and a new layer of lime paint.

With it, a significant drawback of loam is immediately appointed. Loam as a building material requires the necessaryextra maintenance. It is tear-sensitive because the material continuously 'works' under (large) temperature differences. That is also the reason that an empty mud dwelling in which there is no burning can be degraded to the well-known image of a half-collapsed ruin. However, in reality, many decades of neglect have preceded this. If these houses were reasonably maintained, they would still be in a very good condition.

Another drawback is that a mum wall allows itself poorly after insulating. Although the basic insulation value of a (thick) mud wall is in principle quite good, in the past there were also houses built where the walls were not actually made thick enough. Many people subsequently made the mistake of reinsulating these walls in the standard way. Namely, due to the use of insulation boards or styrofoam plates (Tempex or Styropor). With disastrous consequences. As mentioned, loam has the excellent property of natural moisture regulator. The mum walls must always be able to 'breathing'. When the wall is sealed airtight on one side, the consequences can be guessed; mold, moisture spots and in extreme cases even an entire wall that loses its stability.

Loam as a modern building material

As awareness of the benefits of using sustainable materials has increased tremendously in recent years, the use of clay as a building material is also being revived. In Denmark, for example, modern family homes are now being delivered, which are largely made of clay. Even in countries such as Germany, Austria, but also in the Netherlands, the awareness of the pleasant properties of this ancient building material is growing. In the Netherlands you can see this in the increasingly popular straw/loam building community . We now understand exactly why!

Become a free member of Yoors? Then sign up Here on.

Life is too short to sit in the office